The moment it came to be known that Brazil President Jair Bolsonaro was tested positive for coronavirus, SY Quraishi wished that PM Modi too should test for the deadly COVID-19 coronavirus. Quraishi has indirectly expressed his desire to see Modi dead.

On Thursday, an Islamist shared the news on social media that Brazil President Jair Bolsonaro has tested for the deadly coronavirus. In addition to that, the radical Islamist wished that Prime Minister Modi, who had recently met the Brazilian President Bolsonaro on the occasion of Republic Day, too should test for the contagious disease.

SY Quraishi wants PM Modi to be infected with coronavirus, which has now become a global pandemic. Jair Bolsonaro was tested for the virus after his secretary Fabio Wajngarten tested positive. Bolsonaro’s results are still pending. This is not the first time when rabid Islamists seem to be happy at the prospect of Prime Minister falling ill, what was shocking was that former Election Commissioner SY Quraishi too turned out to be an Islamist who could wish ill on the PM.

In the year 2009, former NDTV journalist Sunetra Chowdhury expressed joy when Narendra Modi was tested positive for swine flu. Earlier also, a journalist associated with the Quint, Suprateek Chatterjee, tweeted that he was happy to know that Prime Minister Modi was a year closer to death. Many have wished bad health for Narendra Modi, but there is a famous saying that goes, “one who is protected by God, cannot be killed”

Expressing his desires towards PM Modi, SY Quraishi cursed him on social media for being ill. Wishing bad health for Modi, Quraishi has spewed poison against him. It is quite difficult to believe that SY Quraishi, who served as 17th Chief Election Commissioner of India, could pray to God for the death of PM Modi.

Islamists have traditionally been anti-Modi who never wish him good health, they rather wish him bad health. Quraishi took to social media to express his bad feelings about PM Modi, but He was criticised by the netizens for the hateful tweet. After being trolled by netizens for his bad behaviour, Quraishi sought an apology from Prime Minister Narendra Modi. 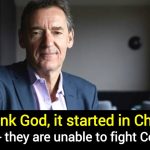