In a shocking video, which has gone viral on social media, a Muslim cleric (Maulana) can be seen delivering a hate speech against Prime Minister Narendra Modi and Home Minister Amit Shah as he does not accept the Citizenship Amendment Act (CAA) and National Register of Citizens (NRC) bill. The video of hate speech by Maulana shows that a Muslim cleric issued a death threat against India’s PM Narendra Modi and HM Amit Shah, threatening to wage ‘jihad’ in India.

The Muslim cleric was identified as Mufti Shahryar Raza who threatened to kill India’s PM Modi and HM Amit Shah. The video was uploaded on 9th February by Youtube channel ‘Ghulam-e-Razza’, reported OPIndia.

” A woman like Sushma Swaraj met her fate because she did not allow Sonia Gandhi to become India’s Prime Minister. Sheila Dikshit too met her fate. Arun Jaitley died recently. When Gandhi, Nehru, Rajiv, Narasimha, Vajpayee could not escape their deaths, do you think Modi- Shah can? They both go as well. Why are you afraid? Wait for another 2 to 4 years, Modi and Shah will suffer graver consequences than these leaders”, said the cleric.

Mufti Shahryar Raza went on to say in the video claiming, “The Muslim population in the country will rise to 60 crores and Muslims will dominate India”, he also said that anyone who is dreaming of implementing CAA and NRC will be beaten by batons and burnt to death.

” 30 years from, the Muslim population will rise to 60 crores and if the children of those who dream of an Islam-free India remain alive, they will see that the flag of Islamic sultanate will be waved everywhere in India,” said Mufti. 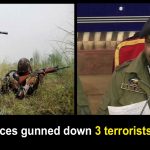