Mohammed Shami is one of the most iconic bowlers in the Indian cricket team. His fruitful contributions on the field are widely known to many.

In surprising news, a video has recently gone viral on social media in which Indian cricketer Mohammad Shami’s wife “Hasin Jahan” can be seen dancing. In the video, she can be seen displaying her dance steps on the famous song ‘Kanta Laga’.

After seeing her performance, her fans and many cricket fans have gone crazy. Meanwhile, some of them are seen asking her to go back to Mohammad Shami and seek an apology from him.

Shami is considered one of the best bowlers in the Indian Cricket Team having several records in his name. Shami created history after taking a hat-trick in the 2019 world cup

Mohammad Shami got married to Hasin Jahan on July 6, 2014. However, it is said that the relationship between Team India star player Mohammed Shami and his wife Hasin Jahan is not good.

They live separately and Hasin has sought a divorce from Mohammed Shami. The matter between the two came to light in 2018, when Hasin Jahan accused Mohammad Shami of match-fixing and having affairs with other girls. Now once again, Haseen has hit the headlines after sharing a video of her dance on social media

Shami and Rohit Sharma went live on Instagram together. In the live chat, the Indian baller said, “I was broken when my wife accused me of match-fixing and domestic violence. I also tried to commit suicide 3 times.”

Hasin Jahan took to Instagram to share a video, in which she is dancing to the famous song ‘Kanta Lag’. In this song, she is wearing a black saree and showing off dance moves. Her dance was praised a lot by many fans and many people advised her to return home.

Aligarh rape: Senior lawyer comes to the rescue, will fight the case for free to give justice to father 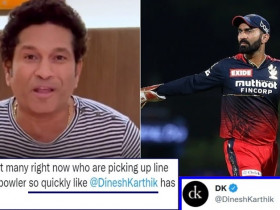