There is literally nobody in this world who wants to lead a frugal life. Though we all dream of being successful very few of us actually get to relish the taste of success. Many of them give up dreams midway due to lack of perseverance or loss at some point or some distractions. However, it is important to not lose hope under any given circumstances and the ones who defied all odds have touched the pinnacle of success.

Farmer Prithvi Pal’s story is one that needs to be told to give enough motivation for the people who are feeling low. Hailing from Banyanpurwa village of Sitapur district of Uttar Pradesh, Prithvi Pal is surprisingly earning up to 2 lakhs every month.

Prithvi Pal is said to have studied up to class 8. He cultivates sugarcane but had gone through a lot of struggles in his early days. it was very difficult for him to run the family expenses due to non-payment of sugarcane on time. Hence, Prithvi Pal thought of doing something else and he started making vinegar.

When Prithvi Pal was asked about his work, he said that he has been cultivating sugarcane for a long time, but due to non-payment of time by the sugar mills, he decided to start making vinegar. Needless to say, the Covid-19 lockdown has taken a toll on the farmers across the country more than expected. At the same time, Prithvi Pal is now engaged in making vinegar instead of selling sugarcane in the sugar mill.

An innovative idea came to his mind and he then implemented that idea that gave rise to a new evolution. He decided to make sugarcane vinegar from its juice.

Farmer Prithvi Pal met Dr. Dayashankar Srivastava, crop safety scientist at the Krishi Vigyan Kendra in the year 2019 and shared his idea with him to start a vinegar business. He introduced him to vinegar technology techniques. Prithvi Pal also took training from Punjab Agricultural University, Ludhiana. Today, Prithvi Pal is making 2 lakhs every month by making vinegar at his home.

He sells this sugarcane for Rs 325 rupees per quintal whereas he is now earning Rs 1,000 by making vinegar from its juice. Prithvi Pal further states that he now produces about 2000 liters of vinegar every month. Surprisingly, he is not well-educated. Therefore, he wants the best possible education for his son.

Prithvi Pal has set an example for other farmers. Prithvi Pal said that if we sell one quintal of sugarcane in a sugar mill, then it will cost Rs 325 only. After this, one has to wait for payment throughout the year. While if you prepare vinegar at home it will benefit you more. It costs only 50 rupees per liter to prepare one liter vinegar. Pal sells vinegar for hundred rupees per liter which fetches him an income of about Rs 2 lakh every month.

Prithvi Pal may be educated till 8th grade, but even agricultural scientists and engineers now approach him to learn more about agriculture. Prithvi Pal is a progressive farmer. Following his example, learning from him, other farmers also have begun doing advanced sugarcane farming. 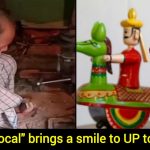