In what was an extraordinary tale of heroics, a police constable saved the life of a man who fell off a train by carrying him on his shoulder and running for about one-and-a-half kilometres to a nearby railway station in Madhya Pradesh’s Hoshangabad district.

A video of the incident has gone viral on social media platforms and a senior police official said constable Poonam Billore’s timely act saved the life of the severely-injured passenger.

“A Dial 100 First Response Vehicle got information about the incident at around 9:30am but could not reach the spot of incident as the terrain is hilly. Constable Billore and the FRV driver Rahul Sakalle ran to the spot. Billore, with help from Sakalle, then carried Ajit on his shoulder to Pagdhal railway station,” he said.

From the railway station, Ajit was taken to a health centre in Seoni’s Malwa area and then shifted to Hoshanagabd district hospital because his head injury was severe, Patel told PTI.

“Ajit is out of danger according to doctors treating him. Billore’s timely response saved Ajit’s life,” Patel said. 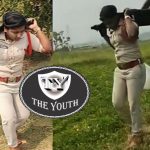 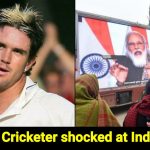