Bollywood actress Sonakshi Sinha had deactivated her Twitter account after being trolled by social media users. She is currently running a campaign that aims to spread awareness on cybersecurity and the impact of online harassment.

In a shocking revelation, the Dabangg actress wrote, “The first step to protecting your sanity is to stay away from negativity. And nowhere more of that than Twitter these days! Chalo, I’m off – deactivating my account. Bye guys, peace out,”

A 27-year-old Shashikant Jadhav hurled abuses on Sonakshi Sinha, following which the actress filed a complaint against him. Mission Josh and Ritesh Bhatia from Cyber B.A.A.P. helped in identifying the accused. The actress’s team then approached Mumbai Police’s Cyber Crime branch to file an FIR against the perpetrators.

The Cyber Crime Branch of Mumbai arrested the man from Aurangabad, Maharashtra for harassing the actress. The actress shared a video on Instagram talking about the incident and urged to speak up against online harassment.

The actor said, “Online world was meant to be a safe space, but it is not. But I will not be silent anymore. I am not going to tolerate abuse and neither should you. Let’s together put a full stop to online harassment. I have filed a complaint against such abuses and today one person has been arrested with the help of Cyber Crime Branch and Mumbai Police. I want to thank them. Online harassment is a crime. Your freedom of speech does not give you the freedom to abuse.”

Dr. Rashmi Karandikar, DCP of Mumbai Cyber Crime Branch said, “We have arrested the accused. Mumbai police cyber cell continues to play a role in making the internet a safe place. Also, women’s safety has always been our priority. Cyberbullying and cyberstalking is a punishable offense. And we all should work in the direction of making the internet safe for all”.

Sonakshi also teamed up with special IGP of the Maharashtra Police and other cyber experts under her initiative ‘Full Stop To Cyber Bullying.’ 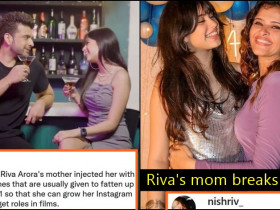 Riva Arora’s mother finally responds to criticism over her daughter’s age, here’s what she said!