Shaheen Bagh has been in the news for over a month after staging dharna against the Citizenship Amendment Act. Now, locals have marched towards Shaheen Bagh demanding the removal of blockade from the road connecting Noida with Kalindi Kunj. But the group was stopped by the police from moving towards the protest site. Sources say the locals from Jamia Nagar and Madanpur Khadar area reached near Shaheen Bagh, the epicenter of the protests against the amended citizenship law CAA.

The protesters demanded that the people, who have been staging a demonstration at Shaheen Bagh for over a month to protest against the Citizenship Amendment Act, should evacuate the site as the commuters are facing difficulties, police said. Locals raised slogans like “Vande Mataram”, “Jai Shri Ram” and “Khali Karao Shaheen Baghwalo ko”, and said the protest site should be cleared at the earliest as commuters were facing difficulties for over a month now. Children are unable to go to school because the roads have been blocked by anti-CAA protesters.

“We want the roads to be cleared. They (anti-CAA protesters) have been sitting on protest for 50 days now. It has been causing inconvenience to us. Our children have not been able to go to school because the roads are blocked,” said Rekha Devi, a resident of Jasola.

Locals said we were not against the protest. Protesting is their right but women should stage dharna at some other place so that locals would not have any problem. Locals also said that police failed to evacuate the protest site and they blamed CM Kejriwal for supporting Shaheen Bagh protesters. Police have detained several locals in buses but people said they would not go back until the roads are unblocked.

People want the road to be cleared at the earliest. They reached the place and requested police to vacate the roads but police asked them to disperse from the place. People asked about those who are protesting at Shaheen Bagh for over a month. They were not asked to vacate the site. Anti-CAA protesters do not care about us and our children. Locals said that At least they should open one side of the road.

People are peacefully protesting against Shaheen Bagh protesters demanding clearance of the road that has been blocked for over a month. They said that they would continue to protest against Shaheen Bagh until they are removed from the main roads. Some people said that they had lost their jobs because of a heavy barricade. People have been managing to go to work after crossing the area for more than 40 days. When children were asked, they said that they were not able to attend school as they could not cross the protesting area.

Men and women along with their children are still sitting on dharna to protest against the amended bill due to which tension and chaos have triggered. Protesters are being misled by the opposition and some miscreants. Women should understand the true fact behind the amended bill. The government has already said that the Citizenship Amendment Act has nothing to do with Indian citizenship. This law aims to grant Indian citizenship to those who have faced religious persecution in Pakistan, Bangladesh, and Afghanistan.

A few days back, Sharjeel Imam made an inflammatory speech against the Citizenship Amendment Act at Shaheen Bagh in New Delhi. He said, “India should be made an Islamic state”. However, he was immediately arrested by the Delhi Police’s Crime Branch from Bihar’s Jehanabad. After Sharjeel Imam, a woman of Shaheen Bagh gave an inflammatory speech. She said in her speech, we do not teach our kids Twinkle-Twinkle, we teach them Jihad of Karbala. 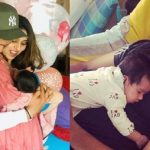