The number of Jihadist attacks in France have increased in 2015 and it does not seem to be ending anytime soon. France has been in a state of terror since a woman attacked two people in a supermarket with a boxcutter knife.

The incident took place on a Sunday in Southern France when a woman yelled ‘Allahu Akbar’ and slashed two people in the store. Both the casualties were rushed to the hospital and are now out of danger.

The woman struck a man in the chest and a lady at the checkout counter on her eye. Prosecutor Bernard Marchal believes that the woman was psychologically disturbed and was living in isolation. He also stated that there could have been a  possibility that she may have been radicalised.

The attacker was not wearing a veil, but a black tunic over black trousers and black glasses. She was just 24-years-old and has absolutely no police records. A lot of people at the store made a statement that they heard her say it was Allah who told her to do it, that they were all miscreants and that she wanted the police to kill her.

Marchal mentioned how they are not sure whether this was a terrorist attack but it has obviously left people terrified.

A similar incident had happened last month when a knifeman shouting “Allahu akbar” killed one person and wounded four others during a Saturday night attack in central Paris.

It is unfortunate and terrorizing how more than 240 people have been killed in jihadist attacks since the massacre at the Charlie Hebdo satirical magazine in Paris in January 2015.

There is no religion that preaches killing of other innocent people and it’s about time we make that clear to the world. If you agree with us, share your views in the comment section below. 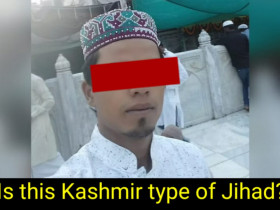 I was forcefully fed meet on Navratri: Hindu girl cries after Muslim lover harasses her