If you too are fond of reading the news on the social media, as it gives you rather quick updates on all developments taking place across the globe, you may have come across the story of a Lenin’s statue which was brought down by some locals in North East. They are said to be BJP supporters who demolished the idol at Belonia College Square of Tripura. Following the incident, Home Minister Rajnath Singh talked to the governor of the state over the phone and requested him to main peace until a new government is installed.

Tripura was under the rule of the Left Front led by the Communist Party of India (CPI) For last 25 years. The Left parties see Vladimir Lenin, whose statue was razed, as their political ideal. Leftist politicians went berserk when they got the news of their ideal’s idol being tortured. But this must be noted that it is not the first case, in 2008, leftist supporters, who are crying victim now, did the same to a statue of Rajiv Gandhi in the same state.

Now let us know who is Vladimir Lenin is really.

# Vladimir Lenin was born as Vladimir Ilich Ulanov in 1870, in Simbirsk, which was later renamed Ulyanovsk in his memory. His last name ‘Lenin’ was adopted in 1901, when he was in exile doing underground party works.

# His parents were well educated and highly cultured, which ignited Lenin, the third of their 6 children, towards education. He father was a government teacher.

# He was the key figure of the Bolshevik Revolution of 1917 in Russia, which was the first biggest revolution of the twentieth century worldwide.

# He, thereafter, took over as the first leader of the newly formed Union of Socialist Soviets or the USSR.

# Lenin was a staunch follower of Karl Marx. And he aimed at imposing his belief on his country.

# Lenin’s elder brother Aleksandr and his friends were arrested in 1887 for planning the assassination of Emperor Alexander III. All of them were found guilty and executed.

# He claimed he cared for the poor. But he distributed pamphlets inciting the people to rise in revolt  against the ruler.

# Furthermore he even asked people to pick up guns and taught how to make lethal weapons, which ultimately led to enormous bloodshed. Millions of people, mostly the poor, were killed in no time following his order.

# Lenin advocated dictatorship in the country. In simple words, he was against democracy or elected government. 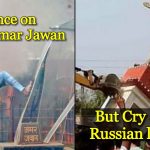