‘Simplicity’ should not be taught but it should come from within and for Nana Patekar, giving back to the society means everything to him. This is why he is a man of simplicity. He always feels a great sense of accomplishment when he steps forward to do donate something for a noble cause.

From making as little as Rs 35 a month to now becoming one of the most humble donors to the farmers of the drought-hit areas, Nana Patekar’s story is one that needs to be told. He is so rich and can afford any luxurious thing but still prefers to live a middle-class life. He has donated almost 90% of his earnings to charity. This sums up the essential Nana Patekar for you!

While many celebrities prefer to choose luxurious homes to live, Nana Patekar prefers to live in a 1 BHK apartment with his mother and he is satisfied with it.  After coming to know the news of almost 62 families of the farmers who committed suicide in the Marathwada region, the generous and kind-hearted Nana Patekar has made a donation of 15,000 rupees each family.

According to some sources, he has adopted some villages and he is trying to transform them. His foundation has already managed to collect as many as Rs. 22 crores from the people for farmer welfare so that they could fill the dried lakes and rivers so as to provide fresh and safe drinking water to farmers and their families.

He has been doing all these generous acts behind the scenes. Let’s take a moment to appreciate Nana Patekar for his attitude. Talking about his involvement and huge contribution towards the noble cause, Nana Patekar told media: “Marte damm tak jeene ki vajah mil gai hai mujhe.” (meaning- I have found a reason to live, till I die.) 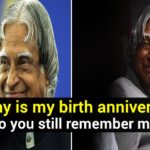