India’s golden girl, Hima Das has come a long way to touch the pinnacle of success. She faced a lot of difficulties in life at an early stage and the picture below sums up everything. She had to work really hard to showcase exuberance.

After giving all efforts, she reaped rewards and came through with flying colours. From Assam’s rice fields to becoming India’s first world gold medallist on track, she is now an inspiration to countless Indians.

Hima Das stole the spotlight for scripting history on Thursday as she successfully clinched India’s first ever track gold medal at the IAAF World Under-20 Athletics Championships in Finland. It was indeed a great news for her and her family and for the country as well.

Hailing from Assam, the 18-year-old Hima Das made the entire nation proud as she came through with flying colours. The incredible fight that she put up at the mega event just goes to show that she is determined to win. Her undisputed exuberance also reinstilled faith in women empowerment.

Hima Das recorded a time of 51.46 seconds in the 400m race event. After winning the gold for India in the World Junior Championships, she was blissfully pleased as punch with her efforts that reaped rewards. She took time to thank all the Indians who supported and cheered her through and through.

“I am very happy to win the gold in the World Junior Championships. I want to thank all the Indians back home and also those, who were here cheering me. It was very encouraging to have this kind of support,” an emotional Hima Das said after the race.

India is a force to reckon with in Olympics and every Indian is proud of Hima Das today. No words to describe the feelings of this spectacular feat. It is a great achievement for this golden girl, Hima Das who not only made her family proud but also the entire nation. It is a tribute to have such an amazing girl in our country and she has to blossom to take the country in sports to greater heights.

Countless wishes kept pouring in for the golden girl in all snippets of the country. She is trending now in social media for all the right reasons. Hima Das broke into tears at the podium while singing the national anthem after receiving the gold medal. This goes to show that Hima Das has so much love for India.

You don’t need a magic wand to become successful in life. All that you require is the willingness to succeed, the will to do things, the ability to move on and the perseverance to try even when there are failures. If you have all these abilities, you can succeed in life. 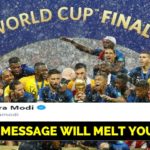