Love lights up when you completely understand each other. Just like hunger, love gives you wings as well. When a tale of two interesting characters meet, the camaraderie gets doubled. Love exists beyond boundaries without the shadow of doubt. The intriguing fairy tale between the Saudi Arabian girl and an Indian boy blossomed just like the butterfly tasting the flower by its feet.

The woman from a rich Saudi family is in love with a 30-year-old migrant from Nizamabad, who was recruited as a driver with her father. The 27-year-old woman was not bothered at all about the strict home rules as she alone jetted off to India illegally through the Indo-Nepal border in a bid to see her love and tie the nuptial knot with him in Nizamabad.

It was all part of the plan and her boy friend had returned to India in February. Seeing her daughter missing at home, the woman’s father travelled to Hyderabad in an attempt to seach her few days ago and then filed a complaint against the man. However, the daughter, on Saturday, gave a statement to the Hyderabad Central Crime Station that she wants to live in India to start a new chapter with her hubby.

After the man arrived to his native in February, the girl told her boyfriend that she cannot live without him and which is why she reached him soon. “The girl slipped out of Saudi Arabia in May and entered India illegally through the Indo-Nepal border. Then, she reached New Delhi from where she was picked up by the boy. The couple reached Nizamabad and got married,” deputy commissioner of police (CCS) Avinash Mohanty told TOI.

The woman’s father who came to Hyderabad along with Saudi Arabia embassy officials didn’t really know that his daughter had already married, he lodged a complaint reporting that his daughter was kidnapped by his former driver. As per his compliant, a case was registered at Cyber Crime Station.

Some detectives went to Nizamabad and began their investigation process and finally traced the girl on Friday. She was asked to return, but she refused it at the spot telling them that she wants to stay in India with her husband. This serves as a testimony to the fact that beyond boundaries there exists a world of everlasting love and mutual respect. 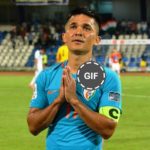