After several media reports claimed that two labourers were deboarded from the Rajdhani Express in Jharkhand despite having confirmed tickets, the Railways have strongly denied the claims. The Railway officials have also released CCTV footage from the railway platform to prove that the passengers arrived at the station after the train had left the station, and they had lodged a false complaint.

Several Hindi media houses had reported that two labourers Ramchandra Yadav and Ajay Yadav were thrown out of the New Delhi – Bhubaneshwar Rajdhani Express at the Koderma Junction in Jharkhand by the TTE. The reports claimed that the TTE had deboarded them from the train, saying that the train is for VIPs and they are not privileged enough to board the train.

After the incident, Ramchandra and Ajay had lodged a complaint with the station master against the TTE, which was later forwarded to higher Railway authorities. The reports quoted DRM of the Dhanbad Railway division Ashish Bansal saying that if the incident is true, it is wrong, and action will be taken after the matter is probed.

The All India Mahila Congress tweeted the incident, stating that the Rail Minister is responsible for the incident. However, now Ashish Bansal has clarified that no such incident had happened, and the two persons had actually missed the train.

At the same time, the Railways also issued an official statement, refuting the claims of the media and said that news reported in the newspaper is factually incorrect, as the passengers had missed the train as they arrived late on the platform. The Railways asserts that there was no altercation between the passengers and any Railway Staff on duty at Koderma.

It further says that passengers work in a private company in Odisha, and they recorded an incorrect statement in the complaint register kept with the station master, and sent a copy of it to his employer. Later, this incorrect complaint reached to some press reporter who published it.

As soon as the reports of the complaint came to the knowledge of the Dhanbad railway officials, the CCTV footage was examined, and the truth was revealed. Dhanbad Railway Division is issuing a rejoinder on the matter in newspapers. 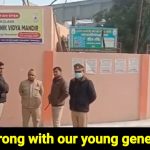