Pondicherry University student, who did her masters in Mass Communication declined her gold medal in unity with students who are protesting against the Citizenship Amendment Act (CAA) and National Register of Citizens (NRC).

In a micro-blogging site on Instagram, Rabeeha Abdurehim added that this was her way “of showing the world what education means to the youth, not medals and certificates but learning the message of unity, peace and standing up against injustice, fascism and bigotry.”

Rabeeha Abdurehim told The Telegraph it was something she could do “in unity with all the students who bore the brunt of the security forces’ crackdown for protesting at Jamia Millia Islamia, Aligarh Muslim University and several other institutions over the act and the NRC.”

She refused to accept the coveted gold medal but received her degree certificate.

The student had also alleged that she was asked to immediately leave the auditorium when chief guest President Ram Nath Kovind arrived and was only permitted back inside after the President left the place. In her Instagram post, she mentioned that no one told her why she was sent outside.

In her Facebook post, Ms. Rabeeha echoed that while she dreamt often about the moment she would receive a prestigious gold medal and master’s certificate, “never did I imagine it would end up being in a way in which I could send a strong peaceful message across India.”

“As a woman, as a student, as an Indian, today in my graduation I reject the gold medal awarded to me in solidarity with all the students and public who are fighting against CAA and NRC. This is my way of showing the world what education means to our youth, not medals and certificates but… standing up against injustice, fascism and bigotry,” she said.

“And even though (for ‘unknown’ reasons) I was send (sic) out of the auditorium where 100s of students sat awaiting their medals when the president came and was only allowed inside when he left, I feel at peace for the fact that I was able to take a stand as an educated youth”.

A postscript to this mentioned: “I have been seeing news which says I was asked to remove my scarf. That is false. No one asked me to remove anything. No one told me why I was kept outside.”

Maybe because of my opposition to CAA and for having participated in protests over the issue. When I asked the police officers why was I not being allowed to take part in the event, they said they were not sure, but the SSP wanted it this way,” she was quoted as saying by News18.

Meanwhile, SI Humayun, officer-in-charge, Pondicherry University, told The Hindu that the student’s decision to not receive the gold medal was her personal decision.

“All we know is that there was a commotion in the hall and she was asked to leave. She was allowed back after the departure of the President,” he added. 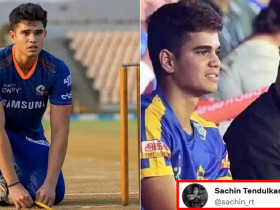