It has been reported that anti-CAA protestors attacked and vandalized the Hanuman temple in Patna’s Phulwari during the Bharat Bandh called by the RJD. The mob alongside RJD goons executed their “Bas naam rahega allah ka” philosophy. Rioters broke the idol of Bajrangbali in the name of the anti-CAA protest.

The protests in the name of CAA have taken a communal turn with anti-Hindu and Jihadi forces using it to defame Hindu symbols and structures. During the Bharat Bandh, Jihadi forces in the state headed towards a Hanuman temple and broke the idol of Bajrangbali inside the temple. Though the Citizenship amendment act has nothing to do with any religion or faith, the forces who are set to defame Hinduism and Hindus have taken their masks off to display their Hinduphobia and Hindu hatred.

MP Asaduddin Owaisi tore a copy of the Citizenship (Amendment) Bill, 2019, in the Lok Sabha, saying that the Bill tries to divide the country, but now he will not say anything about these protesters who vandalized Hanuman temple and broke the idol of Bajrangbali inside the temple. Opposition parties called Citizenship bill unconstitutional and divisive but they remained silent when agitators ransacked Hanuman temple in Patna’s Phulwari.

The way Muslim protesters have protested across the country is surprising, they chanted ‘Kaafiron se azadi’, Hinduyon se azadi, ‘bas naam rahega allah ka’ among other slogans only to terrorize the Hindus, Jains, and Sikhs.

We must not forget the way certain people of the country have created violence while protesting against the CAA, with burning vehicles, buildings, destroying public properties and desecrating temples which resulted in huge loss of the government.

A massive crowd along with the goons of their political protectors in RJD have rampaged the law and order of the state with destroying buildings, temples, roads, and everything which came in their sight. RJD must be ashamed of the way its leaders have instigated protesters for violence in order to appease the violent mob. The state government should promptly renovate the temple and must take strong action against the radicals in order to restore its credibility. 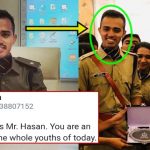