Devendra didn’t think that his life had finished soon after he lost his hand in an accident. At the very next moment, he still had the winning attitude to make India proud. Of indomitable grit, determination and resilience, Devendra’s extraordinary tale is all the motivation you will need today.

Devendra proved that he is a real fighter. He regained his lost confidence and started to look at life with a fresh and positive perspective and there is no looking back since then- an important stepping stone to success.

In 2002, he bagged gold at the 8th FESPIC Games javelin throw. He displayed sheer skill and threw it despite lacking one arm and proved that he was at a different version altogether.

You don’t need a magic wand to become successful in life and Devendra had the willingness to succeed, the will to do things, the ability to move on and the perseverance to try even where there were failures.

Devendra had all these qualities in himself and he doesn’t have to worry about his career anymore. According to him, the process of betterment can go on and on in life without a stop. His life story should be shared with others.

Let’s appreciate the fighter Devendra! The Youth Salutes him and wishes him good luck for his future endeavours. 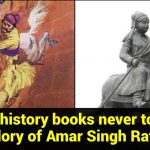