Mahendra Singh Dhoni is still the best finisher in Indian cricket history, come what may. When he is not out on the pitch, he has single-handedly managed to steer India to glory on 47 occasions and it was only 2 times that he failed to help the team to go past the victory line.

However, during India’s World Cup match against New Zealand, billions of Indian cricket fans including Dhoni haters were counting on MS Dhoni when the team’s top-order failed miserably and fell prey to New Zealand’s bowlers.

As usual, the 38-year-old MS Dhoni was calm and composed and started his innings slowly. He alongside Ravindra Jadeja dragged the team till the end. But when Jadeja got out, the responsibility fell on Dhoni’s shoulders.

Just as when we all hoped that MS Dhoni would finish things off in style, the end result was heartbreaking as Martin Guptill ran him out with an absolute peach of a throw that went on to hit the stumps directly. This was the turning point of the game after which Dhoni got out for 50 runs.

Heartbroken MS Dhoni, while making his way back to the pavilion, he was spotted crying. 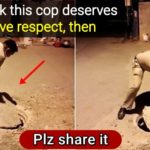 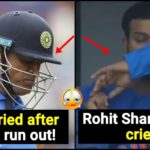