Malayalam actress by the name of Priya Prakash Varrier, who became an overnight sensation after a video from her upcoming film ‘Oru Adaar Love’ stoke the spotlight when we all saw her wink. The media gave non-stop coverage about the wink scene as the video instantly spread like wildfire on social media where she became a popular star even before her film hit the screens.

Now another video of her is trending on the internet where people are liking, commenting and sharing it second after second. In the latest video, Priya Prakash Varrier is seen giving a lip-to-lip kiss to her Oru Adaar Love co-star Roshan Abdul Rauf.

The kiss scene goes for about 10 seconds. FYI, both actors were seen in school uniform during that viral wink video. Now this new video has got her social media fans talking about her time and again. It has been said that her upcoming film is all geared up to hit theatres within a week and people think that this could also be a marketing trick by the makers to attract the fans for Oru Adaar Love.

The high-school romantic film is being made in Malayalam but it will also be released in other languages like Telugu and Kannada. 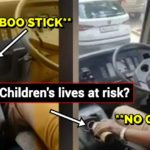 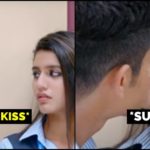