In a shocking video, a woman was forcibly dragged by the kidnappers into the van from outside a beauty parlour in Punjab’s Muktsar Friday morning, just hours before her wedding, according to the police.

CCTV camera caught a horror video which shows the abduction of the girl from Fazilka (Punjab). “The kidnappers left the girl at Firozpur bus stand, the accused will be arrested soon,” Ashok Kumar SHO Muktsar said in a statement. It has been said that the girl, who was to marry a youth from Muktsar, is safe as she is under police protection at the moment.

The footage showed the accused waiting outside the beauty parlour at around 5.30 am and dragging the girl into the car the moment she came out of the parlour. However, the girl can be seen immediately fighting back but is eventually lifted and tied up inside the waiting car.

As of now, the cops are probing the matter and further details are awaited. 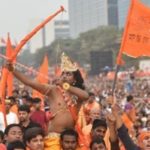