Love is life when you completely understand each other. Just like hunger, love gives you wings as well. When a tale of two interesting characters meet, the camaraderie gets doubled. If you know the difference between ‘Impress’ and ‘Express’, then you are bound to have a great deal of camaraderie with your partner.

An intriguing fairy tale that took everyone by a surprise:

The Indian society has witnessed both love and arranged marriages in contemporary world. But, have you ever heard love exists even beyond boundaries? Like every fascinating fairy tale, the romance between the Russian girl and an Indian boy blossomed just like the butterfly tasting the flower with it’s feet.

This serves as a testimony to the fact that beyond boundaries there exists a world of everlasting love and mutual respect. Russian girl named Evgenia Petrova took the relationship to another level as she came to India to unite with her boy friend Vikram.

She arrived in Berthali located on the outskirts of Haryana, Kurukshetra, on July 8th 2014 with an intention to tie the nuptial knot with Vikram, whom he fell in love with on Facebook. The made for each other couple got married as per the Indian traditions and are living a happy life now.

Who is this Russian Lady?

Known to be a rich girl, Petrova said that she has come to India to pull off her paper work first. Also, she added saying that her family has agreed to the marriage. She took a liking to the incredible Indian culture and she was able to get into the scheme of things with Vikram on a routine basis. Russia is an extremely cold country but she was able to get accustomed to the Indian environmental conditions to stay with her love. This goes to show how much he means a lot to her.

Vikram plies his trade as an assistant to a doctor in Amritsar. It is learnt that he was ‘single’ after shifting his base to Amritsar. To get rid of loneliness, Vikram sent a friendship request to Petrova which she accepted and that’s where the love kick-started.

As times and the chats progressed, the intriguing friendship transformed into love. Ever since they truly understood each other, they both decided to spend rest of their lives together.

Vikram got endless support from his mother Shiksha. However, Shiksha was very particular in following Indian traditions that would follow in marriage. But that doesn’t take away from the fact that they will also respect the Russian culture as well. 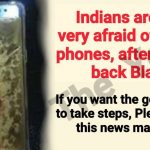