Once again its the same scenario as far as the CBSE Class 12 board results are concerned as girls once again have managed to get the better of boys in terms of pass percentage and Raksha Gopal from Noida topped the exams with a jaw dropping percentage of 99.6 and the second best of 99.4 was recorded by Bhoomi Sawant De of DAV Chandigarh.

According to a statement released by Central Board of Secondary Education(CBSE), 87.5% of the girls who appeared for exams have cleared all subjects, whilst 78 percent of the boys managed to pass their exams.

This has been the case for sometime now, where girls have been registering a better percentage than boys in the CBSE boards. Overall pass percentage came down a little bit when compared to last year. Pass percentage this year is 82 whereas it was 83.05 last year.

The CBSE announced the results of all its 10 regions simultaneously – including the highest 2,58,321 students from Delhi region, followed by Panchkula in Haryana with 1,84,557 and Ajmer in Rajasthan with 1,31,449 candidates.

Of the disabled students, Ajay K Raj from St Thomas Central school in Tiruvananthapuram, topped the exams with a score of 490 out of 500. The board also said that over 125 differently able students managed to secure 90 percent or more and and 21 students secured 95% marks or more.

“Congratulations to all my young friends who have successfully passed the CBSE Class XII exams & best wishes for future endeavours” said Narendra Modi via his official twitter handler. Various other dignitaries wished all the students on their success and tried to motivate all those who didn’t do well.

Congratulations to all my young friends who have successfully passed the CBSE Class XII exams & best wishes for future endeavours. 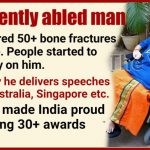