Bollywood is the Indian Hindi-language film industry based in Mumbai. It is the world’s largest film industry in film production. Bollywood grants opportunities to all people from all over the world.

Bollywood is known for its talented actors all over the world. It has produced several legendary actors since it came into existence. The role of actors in Bollywood has been great. Today, we will have a look at the highest-paid Bollywood actors who have been ruling the film industry for several years.

Akshay Kumar’s true name is Rajiv Hari Om Bhatia. He is one of the highest-paid actors in Bollywood industry. He was a mischievous boy who was born into a Punjabi family that used to dwell in Old Delhi.

He put forth a lot of effort for his job, and he also completed Taekwondo and martial arts training. He began his Bollywood career as a junior artist, and for the first time in 1992, he acted in the film “Deedar.” Following this film, he went on to make more action flicks, which drew everyone’s attention to his work.

His supporters began to refer to him as “Indian Jackie Chan.” Akshay Kumar now charges a fee of 135 crores for each film. Filmmakers are drawn to him because of his popularity and acting abilities.

Aamir Khan is one of Bollywood’s most prominent personalities and successful actors. In his childhood, he appeared in his Uncle’s film as a young artist and wowed the audience. He was also a state-level lawn tennis player and a member of his school’s tennis team. He also won the Maharastra state tennis championship.

His debut Bollywood film, “Qayamat Se Qayamat Tak,” was a drama-comedy hybrid. With the support of his cousin and co-star Raj Zutshi, he advertised his film on the highways, rickshaws, and buses.

With his cousin and co-star Raj Zutshi, he promoted his film “Qayamat Se Qayamat Tak.” As a fee for his picture, he takes a portion of the proceeds, roughly 75 to 85 crores.

Hrithik Roshan comes from a film-making family. His father is a music director, and his mother is the daughter of J. Om Prakash, a producer, and director. He is not only a talented actor but also a great dancer.

He debuted in the film “Kaho Na Pyaar Hai,” which was a box office success. He worked as a child actor before this picture. He is a fitness nut who also owns HRX, a well-known clothing line. For his films, this outstanding actor charges between 50 and 65 crores.

Salman Khan hails from a Bollywood family, and after graduating, he wanted to pursue acting as a career. Salman Khan’s debut film was “Biwi ho to Aisi,” and throughout his Bollywood career, he has played practically every type of role.

He also has a non-profit organization called “Being Human” to which he donates a portion of his pay. According to insiders, he charges around 70-75 crores for each film and also receives a cut of the revenues.

Ranveer Singh began his career as a result of advertisements. He received an offer from “Yash Raj Films” in 2010 and performed the lead part in the superhit “Band Baja Baraat.”

He is currently one of Bollywood’s most prominent actors, and his fashion style has contributed to his popularity. Deepika Padukone, the diva, is his wife. Ranveer Singh’s pay for each film is now about 35-40 crores, and he has cut his fee by 40-50 per cent in line with industry predictions during the Pandemic.

In his career, he has appeared in over 100 Bollywood films and runs Ajay Devgn Films, a producing firm. He is the only actor who owns a private jet and uses it to fly from one location to another for personal reasons. Ajay Devgan charges between 30 and 50 crores for every film.

Ranbir is also known as the “chocolate boy” since the girls adore him. He made his acting debut in the film “Saawariya,” and the song “Jab Se Tere Naina” from that film has become extremely popular; during the filming of this song, about 100 people saw him naked in his towel. Ranbir charges around 25 crores per film, and he is entitled to this sum due to his abilities and capabilities.

Shah Rukh Khan is popularly known as Bollywood’s King Khan. He is a self-made man who is well-liked by his supporters. He made his acting debut alongside Divya Bharti in the mega-popular film Deewana. Before his acting career, he worked in a few television series.

He was a student at Delhi University and did his acting training at the Delhi Drama School. His most well-known film is “Dilwale Dulhaniya Le Jayenge,” in which he co-starred with Kajol, and he has also been in films such as “Chak De India” and “My Name Khan.”

Through these films, he expressed his love for his homeland and gave a constructive message to society. He has signed a 45 per cent profit-sharing deal for the year 2021. As a standalone film, he’s quite good and charges around Rs 50 crores

Bollywood’s Big B and a Hindi cinema legend Amitabh Bachchan is the only actor in Bollywood who has been active for more than 70 years. The entire Bollywood industry admires and respects his work. He becomes known in Indian cinema as an enraged young man, a moniker that he still bears.

He also hosts “Kaun Banega Crorepati,” a popular television show with great ratings around the world. He has a long list of successful films in Indian cinema, the most well-known of which is “Sholay,” which is liked by practically everyone in India. Amitabh Bacchan currently charges around 18-20 crores for each film.

Suryanarayana Raju and Siva Kumari had Prabhas as a child. He is the youngest of three siblings, with an older brother named Pramod and a sister named Pragathi. He starred in S. Rajamouli’s epic Baahubali: The Beginning (2015), which is India’s fourth-best film. He has charged 100 crores for a film in Tollywood, and the news has spread the Bollywood industry like thunder 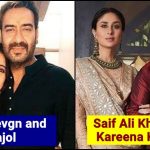