In a shocking incident, two cousins allegedly fell in love with the same girl and then ended their lives by committing suicide. Before taking such extreme step, they recorded a video message. The police said that the cousins committed suicided by jumping before a train in Rajasthan’s Bundi district.

The dreadful incident took place near Gudla village on Sunday night. The two brothers namely Mahendra Gurjar (23) and Devraj Gurjar (23) are the residents of Keshavpura village under the Dablana police station in Bundi district, police added in a statement.

Meanwhile, images and detailes in their phones suggest that the cousins were in love with the same girl. Area SHO identified as Lakhanlal Meena added that both got a name “Asha” carved on their arm.

Needless to say, the locations or whereabouts of the girl are yet to be determined. Based on the first evidence, the two cousins ended their lives. Nonetheless, no suicide has been recovered according to SHO.

According to a Times Now report, the two cousins had recorded a video message on their mobile phone before jumping in front of the running train. In the video clip, they were caught saying that no one pressurized them for the extreme step. 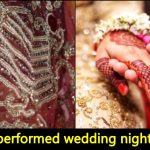