As many as twenty-two children- 10 girls and 12 boys have now been selected for the Indian Council for Child Welfare (ICCW) National Bravery Awards, 2019. It has been said that one award has been given posthumously.

It is worth mentioning here that the brave children come from 12 different states of India. The prestigious Bharat Award has been conferred on 15-year-old Master Adithya K, who is from Kerala. Adithya had saved more than 40 lives when a bus they were travelling caught fire in Nepal in May 2019. Just 50 km short of reaching Indian border, the bus had unexpectedly caught fire at Daunnein.

While the bus driver escaped the scene, Adithya sprung into action without even caring for his life and then saved 40 passengers by using a hammer to kick the back window just moments before the diesel tank burst into a fireball and the whole bus burnt into ashes.

At the award ceremony, a smiling Adhithya says he “wants to join the Indian Air Force”. “I will use the scholarship to study hard,” he said.

Another Kerala resident and award recipient was as gallant but unlucky. The only recipient to receive the award posthumously is Muhhamed Muhsin EC, who has honoured with the Abhimanyu award.

From Kozhikode, Muhamed Muhsin had risked his life only to save three of his friends from drowning in the deep sea. The friends had survived but Muhsin, their saviour, drew his last breath. Mushin’s father who got emotional after his son’s death said, “My child died a brave death. The award is for all the brave children.”

It has been said that two awardees from J&K Sartaj Mohidin Mughal and Mudasir Ashraf were found with great difficulty. The security forces have knocked on their doors to inform them that both had clinched the bravery award. Mughal rescued his family during live shelling from Pakistan. Mughal resides at the Line of Control (LoC) while Mudasir helped Indian Air Force and rescue personnel during the IAF chopper crash in Budgam in February 2019.

A 13-year-old girl identified as Alaika saved her family after their car met with an accident. The proud family stood as she was conferred with national bravery award.

Her family said, “She is our only child. She is our son and our daughter. She has proved that girls are no less than a son.”

The ICCW Markandeya Award was conferred on 10-year-old Rakhi. Hailing from Uttarakhand, she saved her 4-year-old brother from the claws of a leopard. She sustained severe injuries during the incident.

Gita Siddahartha, Chairperson of ICCW said, “The children were selected from 150 entries they scanned through diligently.”

ICCW Dhruva Award has been given to Purnima Giri (16) and Sabita Giri (15) from Odisha who rescued 12 lives from drowning a river when a boat sank into the water full with wild crocodiles.

Ten-year-old Srimati Badra was conferred with ICCW Prahalada Award for helping her friend who lost her right leg in a train accident. It is because of her timely assistance and courageous action, her friend’s life couid be saved. 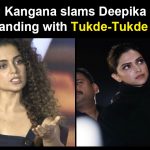 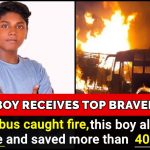