A video of a woman surfaced online, riding a scooty from Kerala, spread like wildfire and the reason behind it will absolutely stun you.

The video clip which is doing the rounds on social media, shows a woman driver standing on the right side of the road on her scooty in broad daylight, as a bus driver, who was coming on the wrong side, is forced to move to the woman’s right.

The woman dressed in red, who is on her scooty in what appears small in front of the bus, does not move from her position on the road and instead, the bus driver takes the right lane.

The video was shared on Twitter by @TheGhostRider31 with the caption, “When you are RIGHT it gives you a very different kind of MIGHT. See Joe a lady rider down South doesn’t budge an inch to give in to an erring Bus Driver. Kudos to her. #GirlPower #BikerLife #BikerGirl.”

The video also proves that when you are in the right direction, then it is necessary to stand your ground despite how frightening the situation is. Even the onlookers on the road seem in awe of the woman’s bold act.

After the video was shared on the Twitter platform, netizens couldn’t stop themselves from appreciating the woman for not moving from her position, despite the fact that bus was trying to move from its path to the narrow lane.

Some Twitter users went on to take a dig at North Indians, adding that this wouldn’t have been possible up North. One Twitter user wrote, “Splendid, however, in North India, the bus driver probably won’t stop. There is a different sort of stupid this side of the land.” 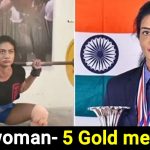