After being tired of faake promises and lack of interest to do the need for the people, the villagers in Odisha’s Ambapadar village in Kalahandi district made up their mind to collect fund themselves in a bid to construct the road.

The decision to build a road on their own came after the frequent requests made to the higher officials and governments failed to move the state.

Politicians on TV channels claim that they would do anything for the people but on ground level, the truth is different.

The people in the villager claims to have approached the government many times but sadly their requested were never considered at all. Since independence, they have been waiting for construction of a three kilometre road.

One of the villagers said, adding the residents donated Rs 3000 each from their own pockets for the construction of a road.

“During elections, political leaders come to us for votes and promise to make efforts for the road construction but after polls if forget it,” added another villager. 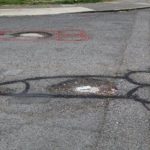