A US-based activist by the name of Senge Hasnan Sering from Gilgit has made a shocking claim that post the IAF deadly air strikes, more than 200 militants’ bodies were shifted to Khyber Pakhtunkhwa from Balakot.

Reports from Urdu media were rife about some bodies being transported from Balakot to Khyber Pakhtunkhwa and tribal areas of Pakistan in the aftermath of India’s anti-terror strike, the activist claimed.

The activist also took to his Twitter handle to share the video where a Pakistan military officer confesses to “martyrdom” of more than 200 terrorists during Indian strike on Balakot and also promises to support their families.

#Pakistan military officer admits to "martyrdom" of more than 200 militants during Indian strike on #Balakot. Calls the terrorists Mujahid who receive special favors/ sustenance from Allah as they fight to support PAK government [against enemies]. Vows to support families pic.twitter.com/yzcCgCEbmu

The officer can be heard saying that “Mujahids receive special favours and sustenance from Allah as they fight to support the Pakistani government against enemies.”

Talking to ANI, Senge Hasnan Sering says that he is not really sure of the veracity of this video but he said, adding that Pakistan is “definitely hiding something very important that has happened in Balakot.”

By far, Pakistan hasn’t permitted international, as well as local media, to visit or inspect the site and evaluate the damages there as the country continues to claim that the strike happened but damaged the forest area.

Pakistan Foreign Minister Shah Mahmood Qureshi, following the IAF air strike on Balakot, said that Pakistan will take the international media to the spot (where strikes took place) but at the moment, the weather is bad.

Foreign Secretary Vijay Gokhale without giving appropriate numbers said that the air strikes lead to the elimination of “a large number of terrorists”. 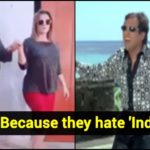