Secularism in India means treating all the religions as ‘equal’. Even the legendary actor Kamal Haasan once told that “You will never find people asking for Muslim Blood or Hindu Blood or Christian blood at a hospital.”

A religion conveys the principles of ‘faith’ and sometimes, the faith may change based on the circumstances. We’ve seen quite a lot of people renouncing their religious teachings only to convert to some other religions, a change that has been happening since the olden days. Only you can change what you believe in and others shouldn’t inspire you to do so.

On the contrary, religious conversion is happening in the nation with people opting to change gods after being brainwashed by a group which encourages people to follow one religious practice alone and not any other religious beliefs. Knowing all this, when a person tried to stop Muslims from converting Hindus to Muslims, he was brutally attacked and murdered at the worst scene.

The shocking incident took place on Tuesday night. The deceased identified as 42-year-old Ramalingam who was a PMK (Pattali Makkal Katchi) leader in Tamil Nadu. He was murdered by a group of people belonging to a minority community for he was against religious conversion.

As per the reports, when Ramalingam was on his way back home, he was assaulted in Kumbakonam in Thanjavur district by a group of unidentified men following which his hands were chopped off. Ramalingam drew his last breath on his way to the hospital owing to excessive bleeding.

PMK Kumbakonam Office Bearer Ramalingam who opposed Muslim conversion in a Dalit colony has been murdered. Looks like radical outfit Popular Front of India is behind the murder. Media, Journos, Liberals & loudmouths who howl for every single thing *silent*? #JusticeForRamalingam pic.twitter.com/9E0xOcMplG

Cops, as well as locals, doubt that the murder is chained to an argument Ramalingam had with a couple of Muslim men previously in the day. Reportedly, a group of Muslim preachers came to the area with a large number of Dalit inhabitants and then started preaching about Islam on Tuesday. At the same time, Ramalingam, who is a former secretary of PMK, was also there at that time and the moment he came across a group of Muslims preaching their religion.

He opposed the men confronted the same and the preachers reciprocated following which started a fight. Later on, the issue was solved by some Muslim clerics.

But some people in the group wanted to teach Ramalingam a lifelong lesson and they attacked him in the night time when he was alone.

A video came to light when Ramalingam is seeing talking to the preachers asking them not to convert people. He says, “Hindus are never anti-Muslims. We worship our God, you worship your Allah”.

“I’m ready to come to the mosque and get involved in prayer. Will you accept a Hindu god? Will you eat the food offered to a Hindu God? We are ready to live together and live together. But you are dividing us”, he told in the video.

Ramalingam casually took the skull cap from one of the Muslim preachers and put it on his head and then he applied vibhuti on that person’s forehead in a bid to convey the message of religious harmony.

Well, it is being suspected that this gesture by him was misunderstood by some people, triggering them to take revenge on him. Police reckon that is the reason why his hands were chopped off as a punishment for his act of ‘applying vibhuti on a Muslim person’.

After the shocking incident, a large police force has been deployed in the Kumbakonam area in order to prevent any further communal riot. Police have registered an FIR under section 302 of the IPC and have also started a probe to nab the killers. 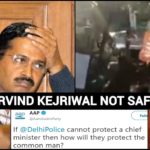 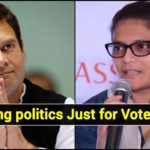