Two Indian nationals hailing from Vadodara were detained by the Saudi Arabia police on Friday on the account of posing and clicking selfies with the Indian Flag inside the Haram in Mecca. While the 12-year-old by the name of Uzair Ali was freed soon after the intervention of the Consulate General of India in Jeddah, his father identified as Imitiaz Ali Saiyed (45) was released on Saturday.

Imitiaz, who is a manager by profession at an optical shop at Old Padra Road, is a resident of Tandalja area of the city. It has been said that he had left for Mecca with his wife and two children on Monday. On Friday, he was taken into custody by the Saudi Arabia police for taking a picture of his son alongside the Indian tri-colour.

The Consulate General in Jeddah in a tweet explained, “Please note it is banned to display flags in Haram area. Our official has already met Mr Imitiaz Ali and son Mr Uzair Ali at Haram Police station. After our intervention, Uzair Ali has been released. We are following the case and all help being extended for early release of Mr Imitiaz as well.”

Yes, We r aware of d incident. The incident has happened inside d Haram in Makkah. Pl note that it is banned 2 display Flags in Haram area. Our official has already met Mr.Imtiaz Ali n son Mr Uzair Ali at Haram Police Station.After our intervention, Uzair Ali has been released./1

Imitiaz’s brother Faiyaz Ali said, “My cousin who lives in Saudi informed us about the detention. We were informed that today in the evening the police will make a final decision regarding the case. We are yet to hear from them. They had taken the flag along with them but did not know that posing with it and taking pictures was an offence.”

Zuber Goplani, who is the National Executive Council member of the All India Muslim Majlis-e- Mushawarat’s, Gujarat Chapter in a string of tweets to the External Affairs Minister Sushma Swaraj, Gujarat CM’s Office, PM’s office and the Consulate General for India in Jeddah, had notified them of the situation and sought their assistance and intervention into the matter. 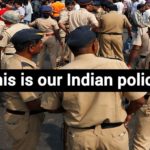