A UP police officer named Tripurari Pandey won people’s hearts as he had taken care of the entire medical expenses of two girls so that those precious little souls would have a great future ahead. This is such a rare example of policing, something which you wouldn’t often see these days.

It was on September 2, Janmashtami two girls one is 5-year-old Anjana and the other is 6-year-old Antima were going to the shop but unfortunately met with a road accident when a speeding bike knocked both of them at the worst scene.

After the first treatment, the girls’ condition looked serious and they were immediately transferred to the Trauma Center of Varanasi. Both are from the Dalits family and the parents of both of them are financially poor as they are daily wage workers. After enrolling in the Trauma Center, the treatment started but their parents could afford the treatment.

After knowing that the treatment would cost more than a lakh, CO Sledgehiya didn’t hesitate to take care of the charges as he alone spent one lakh twelve thousand rupees from his own pocket. It was only because of this generous police officer, two girls are safe and sound. Let’s salute him! After 20 day spell, both girls were discharged from Varanasi BHU Trauma Center and returned home with smiles on their faces. 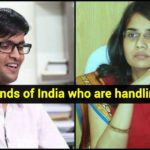