India’s richest daughter Isha Ambani, Daughter of Mukesh Ambani- is all set to tie the nuptial knot with visibly happy Anand Piramal executive director of $10 billion Piramal Group and son of the group’s chairman Ajay Piramal. The 26-year-old Isha Ambani and 33-year-old Anand Piramal have been long-time friends and both the families have known each other for over four decades.

If sources are to be believed, Anand Piramal proposed to Isha Ambani at a temple in Mahabaleshwar. The made for each other couple celebrated the occasion with a lunch, joined by their parents Nita Ambani, Mukesh Ambani, Swati Piramal and Ajay Piramal. Apart from them, Isha’s grandparents, Kokilaben Ambani and Purnimaben Dalal marked their valuable presence at the function. Isha’s twin brother Akash Ambani, younger brother Anant Ambani, Anand’s beloved sister Nandini, Peter, Anya, Dev and other family members graced the occasion.

Anand Piramal has completed his bachelor’s in economics from University of Pennsylvania and also holds a master’s in business administration (MBA) from Harvard Business School.  Isha Ambani holds a bachelor’s degree in psychology and South Asian studies from Yale University and is expected to complete MBA from the Graduate School of Business, Stanford University by June this year.

Mr. Anand Piramal is the proud founder of Piramal Realty and before that, he founded Piramal Swasthya which is a rural healthcare initiative that extends fruitful services to treat over 40,000 patients a day. Mr. Anand was earlier the youngest president of the Indian Merchant Chamber-Youth Wing. He emphasised that Mr. Mukesh Ambani had backed him to become an entrepreneur. As far as Ms. Isha is concerned, she is a managing director of Reliance Jio and Reliance Retail.

Ms. Isha Ambani is likely to start a new life with Mr. Anand Piramal in December but the dates are not official yet. “The dates of their marriages are not yet out. The dates will be out once they are firmed,” said another source to The Hindu. 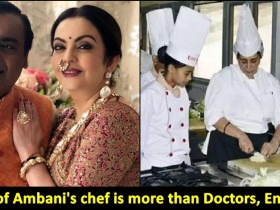 How much do Chefs of Ambani Family earn, quickly check this out