The reality of Bollywood is far stretched from what we perceive in movies. Most of the actors in this industry never dreamed of being a celebrity one day. Some of them struggled every day doing odd jobs while others were ambitious about a completely different field of interest. As fate shined, these stars quit their jobs to pursue their career in Bollywood.

In this article, we have the stories of what Bollywood stars were doing before they entered the film industry.

Ranveer Singh, the padmavat actor worked at advertising agencies like Ogilvy and Mather and J. Walter Thompson as a copywriter before entering Bollywood. After he made his debut with Band Baaja Baarat, he never had to look back. The actor has earned huge commercial success and is married to the diva, Deepika Padukone.

Akshay Kumar used to be a chef and waiter in a Bangkok-based restaurant. He is also a black belt in Taekwondo and studied Martial Arts in Bangkok. Akshay after returning to his homeland wanted to become a Martial Arts teacher. However, fate took him to a different direction altogether and he ventured into films. Now he is a common name across every Indian household who enjoy his action and comedy hits.

Big B had no plans to join Bollywood. He wanted to become a Radio Jockey with Doordarshan. However, he was rejected because the channel didn’t like his voice. He later joined Shaw Wallace, a shipping firm as an executive. He even worked as a freight broker for a shipping company called Bird and Co.

Parineeti Chopra, the bubbly actress who makes her fans go gaga by her flashy dimples wanted to become an investment banker in London. She completed her degree in Business Finance and Economics from Manchester Business School. Unable to find a job in the UK, she interned at Yash Raj Films in their marketing and public relations team.

The pioneer of Indian cinema has seen hard days before making fame in the industry .He became a chemist to support his family of 8 siblings. He moved to Delhi where he found himself drawn towards theatre. After working as a watchman for 2 years, Nawazuddin enrolled in National School of Drama and finally entered Bollywood.

Bhumi Pednekar was an assistant to casting director Shanoo Sharma before making a debut with Dum Laga Ke Haisha, which was a Yash Raj Film.

Ayushmann started his career with a reality show TV Roadies. He worked as a Radio Jockey with Big FM in Delhi and then later joined MTV as a VJ. He is a graduate in English Literature and Master in Mass Communication from Punjab University.

R. Madhavan was a trainer in public speaking and personality development before acting in Bollywood as well as South film industry.

Arshad Warsi did small jobs to make ends meet before he entered Bollywood. He was a door-to-door cosmetic salesman and also worked in a photo lab. He joined Sami’s dance group to realise his passion in dancing and started as a choreographer.

Boman Irani had his fair share of struggle. He simultaneously worked as a waiter and room service attendant at Taj Mahal Hotel before getting a break in the industry. He also helped his mother in running their ancestral bakery shop in Mumbai.

Sonakshi Sinha began her career in Bollywood as a costume designer in 2005. However, later, she was cast as the female lead in Salman Khan starrer Dabangg.

Sunny Leone Canadian-born Indian-American actress and model. Her real name is Karenjit Kaur Vohra. The busy actress who has been an important part of the Indian film industry has got many projects to her name. Currently, she is doing many Indian movies. She was a very famous model in Canada before turning a new chapter in India.

She did odd job before entering into the film industry and we are not talking about her days as an adult star. Prior to that bold career move of hers, she had actually worked at a German bakery, and then worked at tax and retirement firm. 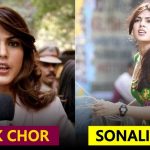