The amount of respect Ratan Tata has in the corporate world is unbelievable and the former CEO of Tata groups is one of the richest persons in our country. Son of the business tycoon Naval Tata, he was always destined to great wealth but he managed to create a legacy for himself. After he took up as the successor of Tata groups, the company’s value augmented in a way no one can ever imagine.

Business magnate Ratan Tata often hits the headlines for all the right reasons. Tata Group Chairman Ratan Tata recently took to Instagram to share a picture of himself with a ‘thank-you’ note, after reaching one million followers on his social media handle.

Ratan Tata had joined Instagram in October last year. Ratan Tata wrote, “I’ve just seen that the number of people on this page has reached a milestone. This wonderful online family is not what I expected when I joined Instagram and I have you to thank for it. I do believe that the quality of connections you make in this age of the internet is far greater than any number. Being a part of your community and learning from you is truly exciting and makes me very happy and I hope our journey together continues.”

The post spread like wildfire and started receiving many comments but one remark annoyed many users. One female Instagram user wrote, “Congratulations Chhotu” with a heart emoji.

Soon after that, the girl was on the receiving end of trolls and abuses with many users calling her comment “shameful” and “disrespectful”.

The female user who was criticised for her comment, however, defended her usage of words by calling it a friendly term adding that Ratan Tata was an inspiration and idol for everyone and that she can say anything beyond words.

Even after that, many didn’t stop criticising her. Seeing this, Ratan Tata himself replied in the series of comments. He commented, “There is a child in each one of us. I request you to treat the young lady with respect”.

Later it was learnt that the girl deleted the viral comment after getting trolled by Instagram users.

Once again, Ratan Tata sorted out the issue in a series of Instagram stories.

Here is the screenshot of the three stories that Mr. Ratan Tata shared on Instagram. 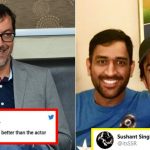