The Indian Space Research Organisation (ISRO) today posted a heartwarming tweet, addressed to all the citizens of India. In the crisis, they thanked their supporters, who encouraged them in the face of losing the Chandrayaan-2 lander earlier this September.

“Thank you for standing by us. We will continue to keep going forward propelled by the hopes and dreams of Indians across the world!” ISRO tweeted

The Indian space agency is grateful for all the support and encouragement it received and despite being unable to clinch half of the mission goals for Chandrayaan-2 on September 7.

ISRO was supposed to put a satellite into orbit over the Moon and send a landing craft to softly touch down on the Moon’s surface. There, a rover and the lander would have been doing further experiments and analysing the lunar crust.

However, ISRO lost connection with the Vikram lander when it was about 95% of the way down to the surface, mere minutes away from landing down. They have since been unable to re-establish the contact.

Even PM Narendra Modi was there at the Chandrayaan-2 control room in Bengaluru to see the historic event, India’s first landing on the Moon.

ISRO hasn’t been alone on this mission either. NASA has also been offering best assistance in trying to establish contact with Vikram lander. NASA’s Jet Propulsion Laboratory has been sending radio signals to the Vikram lander via Deep Space Network, hoping that it will respond. Also, NASA’s Lunar Reconnaissance Orbiter has been making passes over the area, trying to capture the landing site of Vikram.

When the mishap happened, millions of people were heartbroken in India. But they still showered immense love and support towards ISRO. Also, people lined up to tweet today to reaffirm their faith in the space agency.

Yes, it was not a total failure. We still have the Chandrayaan-2 orbiter sending back information from the Moon and it is certain that ISRO will make second attempt. After the first attempt, the scientists have now a better idea of executing the plan. 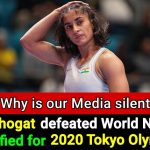