ISRO Chief Dr K Sivan won millions of hearts with his reply “First of all, I am an Indian.” when the interviewer from Sun TV had asked him as a Tamilian, having attained such a reputed position.

“I joined ISRO as an Indian. ISRO is a place where people from all regions and languages work and contribute. But I am grateful to my brothers who celebrate me,” he said.

Soon after this touching statement, people took to Twitter to show massive respect for putting the national identity first.

“I am from Bihar and I am proud of Dr. Sivan like every other Indian. It doesn’t affect me which state he belongs to, what religion he practices, or which language he speaks. For me, he is an honest, hard working chairman of a world renowned space agency. He is our national hero,” tweeted Aakash Srivastava (@Aakashlive) an architect working in New Delhi, according to his profile.

Vani Chauhan (@Vani_Chauhan) tweeted “’First of all, I am an Indian.’ This statement from ISRO Chief K Sivan is something I wish every Indian thought. I see so many thumping their chests to claim superiority of their regional identity or ridiculing others & forget that without India they will have no identity.”

While others questioned, why not?

“ISRO chief K Sivan’s “I am an Indian first” reply to a Tamil channel is stealing all hearts. But I have a question. When a PV Sindhu makes India proud, the people of her State highlight her regional identity. How do we reconcile this dichotomy? #SivanPrideOfIndia” tweeted Viswanath (@viswanath_vis) from Hyderabad.

Sivan was heartbroken and the Prime Minister Narendra Modi hugged and consoled him just six hours after ISRO lost contact with the Vikram lander.

On September 7, the space agency lost connection with the Lander just 2 minutes and 2.1 km away from India scripting history by becoming the first nation to land near the Lunar South Pole.

From working in his father’s fields, studying in a small government school to walking barefoot to school, the ISRO chairperson’s journey is well and truly inspiring.

Before taking charge as ISRO chief, K.Sivan plied his trade as the former Director of Vikram Sarabhai Space Center and Liquid Propulsion centre. Sivan’s success didn’t come that easy. He had to face a lot of struggles in his life before seeing success.

Today, several other scientists in India and across the world draw inspiration from Dr.K.Sivan. 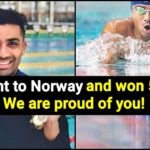 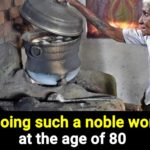