The Congress party congratulated the national space agency ISRO for the successful launch of its lunar mission Chandrayaan-2 and then tried to take credit for India’s advancement in space research and technology by mentioning steps taken by its two prime ministers namely Pandit Jawaharlal Nehru and Manmohan Singh.

Nonetheless, the saffron party BJP hit out at Congress for taking the issue into the political arena.

“This is a good time to remember the visionary move of India’s first PM Pandit Jawaharlal Nehru to fund space research through INCOSPAR in 1962 which later became ISRO. And also Dr Manmohan Singh for sanctioning the Chandrayan2 project in 2008,” it added in a statement.

The remarks came soon after India successfully launched Chandrayaan-2 mission onboard its powerful rocket GSLV-MkIII-M1 from the Sriharikota spaceport to explore the far side (South Pole) of the moon by landing a rover as India is set to become the first country to ever experiment it.

BJP spokesperson by the name of Sambit Patra launched a scathing attack at Congress, saying, “this is really demeaning.. It’s a proud moment for every Indian. Shouldn’t have been drawn into the political arena.

“By the way when there is No future leadership in view there’s a tendency to fall back on the past to stay relevant ..sadly this is what has happened to the Congress,” Patra said on Twitter.

Previously, Prime Minister Narendra Modi hailed ISRO for its successful launch. He then took to Twitter to congratulate ISRO scientists for making this happen. “Special moments that will be etched in the annals of our glorious history. The launch of Chandrayaan2 illustrates the prowess of our scientists and the determination of 130 crore Indians to scale new frontiers of science. Every Indian is immensely proud today.”

“Indian at heart, Indian in spirit. What would make every Indian overjoyed is the fact that Chandrayaan2 is a fully indigenous mission. It will have an Orbiter for remote sensing the Moon and also a Lander-Rover module for analysis of lunar surface,” Modi said in a series of tweets.

Meanwhile, Congress spokesperson Rajeev Gowda said, “From building Aryabhatta in makeshift asbestos sheds in Peenya, Bangalore in the 1970s to the success of Chandrayaan1 in 2008 and Chandrayaan2 today, our space program’s incredible success is our national pride. Kudos to ISRO, our scientists, engineers and visionary leaders from PM Nehru onward.”

Meanwhile, senior Congress leader Anand Sharma said,”India’s space journey began with Pt Nehru, and took a giant leap in 1975 with the launch of Aryabhat, led by charismatic PM Indira Gandhi. ISRO has many notable achievements including Chandrayaan (2008) and Mangalayaan (2013). Wishing Team ISRO all the best for Chandrayaan2.”

The geosynchronous satellite launch vehicle was launched from Satish Dhawan Space Centre at Sriharikota at 2.43 pm and successfully placed the 3,850-kg Chandrayaan-2 into the earth orbit about 16 minutes later.

“India’s ‘Tryst With Destiny’ continues with the successful launch of Chandraayan2. There are defining moments like these that make us a great nation. My gratitude to all scientists and space engineers at ISRO who have toiled day and night to make 130 Crore Indians proud,” Surjewala said on Twitter. 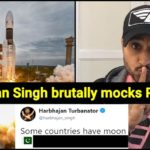