There are one set of students with never give up attitude who make attempt after attempt till they clear the exam while there are some who clear the exam in the first attempt and there are others who cracks it despite having personal problems.

Meet Jayant Mankale who cleared the civil services exam despite 75% loss of vision. To be able to crack the exam as a visually-impaired candidate is indeed a staggering achievement. He was not the one who never came up with excuses but his willpower and determination to clear the exam helped him achieve the goal.

Hailing from Beed district, Maharashtra, Jayant Mankale lost 75 per cent of his vision in 2014 when he was diagnosed with retinitis pigmentosa, an unfortunate disorder that causes loss of vision. However, this didn’t stop him from touching the pinnacle of success. He was one among the very few persons who did not take coaching classes and also did not give up after his father’s demise. His mother and sister were in charge of financial matters of the family, selling homemade pickles, spices and other foodstuffs.

Even in mother’s business, things didn’t go well as the family ran through financial troubles. His father’s pension of Rs 7,300 couldn’t meet their requirements, and they could not clear the loan taken for Jayant’s college education. So when he contacted Pravin Chavan and Manohar Bhole asking for help for the exam, the two persons offered it to him free of cost.

Jayant Mankale said that due to financial difficulties, he could not afford to buy audiobooks or a screen reader. So, he decided to listen to different debates on the radio. The more he listened, the better he picked information.

He said that he took pictures of pages through his mobile and frequently zoomed in to go through it. Despite facing all such issues in his preparations, he secured the All-India rank of 923 in his fourth attempt earlier this year, a stunning feat that is worth applauding.

In an interview with Hindustan Times, Mankale said, “I could not afford audiobooks or a screen reader. Therefore, I started listening (to) various debates on the radio, Lok Sabha and Rajya Sabha TV. I took pictures of pages through my mobile and often zoomed in to read them. I have never read a National Council of Educational Research and Training (NCERT) book, and I couldn’t use hand-written notes, which made preparation very difficult.” 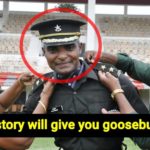