In a heartbreaking incident, a young Indian Navy Officer passed away after a fire broke out onboard the ‘aircraft carrier INS Vikramaditya’ on Friday.

Lieutenant Commander identified as DS Chauhan drew his last breath after inhaling the fumes as he chaired the fire fighting operation.

“Lieutenant Commander DS Chauhan bravely led the firefighting efforts in the affected compartment,” the Navy added in a statement.

If sources are to be believed, fire broke out in one of the compartments of the aircraft carrier while it was entering its home port at Karwar in Karnataka.

Lt Cdr DS Chauhan came at the need of an hour and prevented any severe damage to the ship by putting off the fire.

The 30-year-old officer collapsed after he lost consciousness owing to the smoke and fumes and was then rushed to INHS Patanjali, the Naval Hospital in Karwar for treatment, but sadly could not be revived. He just got married last month but tragedy struck him.

‘Russian-built INS Vikramaditya’ that was formerly named ‘Admiral Gorshkov’ was handed over to the Navy in November 2013. INS Vikramaditya weighs 40,000 tonnes and is the biggest and heaviest ship of the Navy. 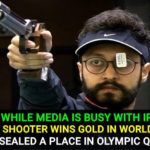