Citizens, Celebrities, Political leaders paid tribute to 40 Central Reserve Police Force (CRPF) jawans’ souls as they were martyred on Thursday while several others escaped the death and were left with severe injuries when the ‘Jaish terrorists’ targeted a convoy in Jammu and Kashmir’s Pulwama district.

Just hours after the massive attack, the grieving father of a CRPF personnel Ratan Thakur, who was martyred in terror attack, said that he is ready to sacrifice his one more son too for the Mother India. He went on to add that Pakistan must also be given a ‘perfect reply’.

“I have sacrificed a son in Mother India’s service, I will send my other son as well to fight, ready to give him up for Mother India, but Pakistan must be given a befitting reply”, he was quoted to as saying by news agency ANI.

CRPF Personnel Ratan Thakur's (who lost his life in #PulwamaTerrorAttack ) father in Bhagalpur: I have sacrificed a son in Mother India's service, I will send my other son as well to fight, ready to give him up for Mother India, but Pakistan must be given a befitting reply.#Bihar pic.twitter.com/rI6cM38Agh

As per the media outlets, the vehicle used by the terrorists was a “Mahindra Scorpio” loaded with 350 kg of explosives. Jaish-e-Mohammed has claimed responsibility for the dastardly attack, in what is the devastating attack on the security personnel in the state.

PM Narendra Modi condemned the attack by saying, “My condolences to families of those martyred in the Pulwama attack, those behind the terror strike will pay a very heavy price,” Modi said.

During this tough time, even other states condemned the attack and they said that people behind this attack should be a paid a heavy price. 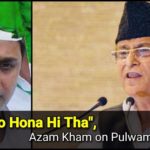