For some people like Rekha Mishra, duty and responsibility come ahead of anything else. Being a railway cop, she showed an extraordinary tale of bravery and worked beyond the call of duty. We often talk about male cops who set an example in the society but at the same time, we fail to appreciate what woman cops accomplished it over their years.

Rekha Mishra did something great which others should take note of. She rescued more than 900 children from Mumbai’s most active station in the last two years. She is quite often praised for her work on the social media and elsewhere too. Mishra comes to work early in the mornings and completes 12 hours of shifts.

Whenever she is at work, she looks for children who are upset or distressed. Having rescued over 953 children so far, she spoke about the virtual importance of safety of women as well as children. Much to her brave attitude, Railway Protection Force (RPF) Sub-Inspector has been featured in Maharashtra State Board’s Class 10th textbook in Marathi this academic year.

Speaking to ANI, Rekha Sharma, RPF Sub-Inspector said, “I felt extremely glad that all the things we do for safety of women & children on a daily basis are being recognised. Children will also get more aware about what they should & shouldn’t do from this lesson. I’ve helped 953 children till now.”

Mishra’s contribution alone is a fantastic piece of achievement. Posted at the CST, Mumbai, Mishra firmly believes that it has something to do with the station that she managed to rescue as many as children’s lives. “Those who are lost, or don’t know their way around, or are troubled, they all get down at the last stop,” reports Mumbai Mirror.

Hailing from Ahmedabad, Mishra says that she always looks out for kids and the elderly ones. Interestingly, she is an athlete who actively took part in state-level events for the RPF. She has also worked on other important cases where she made a raid on ticket scams.

Rekha’s venture all began when she joined the RPF in the year 2014. She shot into prominence after she successfully traced the families of 3 girls in Mumbai who had run away from their homes in Chennai. In a bid to honour her fruitful efforts and reward her dedication, Inspector Rekha Mishra has been selected one among 100 such amazing women to receive the ‘Nari Shakti Puraskar’.

Rekha was also honoured at a special function that was organized by Central Railway General Manager D.K. Sharma on Monday for her achievements.

“She is doing an excellent job and simultaneously serving a noble social cause too. Her being part of the chapter in the textbook will definitely inspire the new generations,” Sharma added.

Mishra said, “It’s a moment of great pride for me. Most children run away from homes after fights with their parents or siblings. Some do it to meet their Facebook friends or even to meet their favourite films stars, and others are lured by the glamour of Mumbai. A few unfortunate ones have also been kidnapped.” 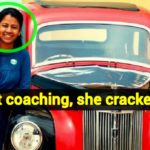