Finally the moment we all have been waiting for is here. The countdown for the visual wonder of Indian cinema “Bahubali-The Conclusion” has officially begun with the team crew releasing its trailer today morning. This film has had a significant impact on Indian cinema and quite certainly its needless to remind people of this fact. This one picture from the trailer stunned every person in the country.

“Bahubali-The Beginning”, which hit the screens on 10 July 2015, took the film industry by a storm as the SS Rajamouli directorial came close to breaking most of the collection records set by Aamir Khan starrer “PK”.

Though the initial craze for the film existed only in the souther part of the country, Dharma Productions bagging the rights for the Hindi version of the film came in as a huge plus for the film unit as it managed to catch the eyes of everyone in the country.

The second part of this film will hit the silver screen on 28 April 2017 and people just can’t wait for that. With the popularity of this film spreading across all the parts of this country, its quite certain that this film is on its way to breaking quite a lot of records. Meanwhile, here’s my take on the trailer that came out today.

Digging a little deeper, the trailer begins with the protagonist Amarendra Bahubali, played by Prabhas, swearing in as the king of Mahishmati and then it throws some light on the most awaited aspect of the film, the life of Devasena, played by Anushka Shetty.

It appears as though Amarendra Bahubali and Bhallaladeva(played by Rana Daggubati) have fallen in love with the same girl Devasena and both of them attend a swayamwar alongside various other princes to win her. We all know who Devasena chose amongst the two and the consequences which followed.

Though its not clear if Devasena is the real reason behind the “Anthar Yudh” (Internal War) between Bahubali and Bhallaladeva, it might as well be the final nail in the coffin which eventually led to the war. As we all have seen in the first part of the film, Bhallaladeva tries to kill Bahubali a couple of times but fails and losing not just the Throne, but also Devasena must have been the killer blow for Bhallaladeva to announce a war against step brother.

One moment which has been the talking point of this trailer is the moment when Bahubali tells Katappa(played by Satyaraj) that no one can kill him as long as Katappa is alongside him. Oh, the irony!

The trailer ends with a scene where Bhallaladeva and Amarendra Bahubali’s son Mahendra Bahubali face off against each other in order to seek vengeance. That one moment in the final part of the trailer will definitely give you goosebumps!

We must admit a fact that the trailer has definitely lived up to the expectations of the fans and this long wait has been worth it. Not just all the fans across India, but across the world will be waiting to see this film hit the screens and 28 April is just 33 days away. Definitely, these 33 days will seem like 33 years for many!

Here are some interesting reactions we have picked up from Twitter.

The #Baahubali2trailer is a giant lead forward for Indian cinema.Massive IDEA,heightened imaginative VFX,n y d hell Katappa did what he did

“It’s an opportunity for me to do something for my people,” says Gambhir 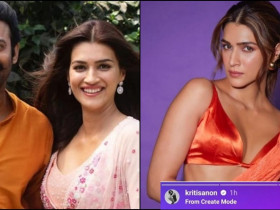