Bollywood superstars have a large fan base not only in India but all around the world. Fans are willing to go to any length to see their favourite celebs. This is why the majority of the costumes and props are sold at auction, with enthusiasts bidding high.

We’ve compiled a list of all the items and costumes that sold for a very high price at the auction in this post.

Salman Khan’s famous towel from the hit song “Jeene Ke Hai Chaar Din” was auctioned off for Rs. 1,42,000, with the money going to a charity. A collector in Mumbai auctioned off the iconic towel.

The proceeds from the towel’s sale will benefit the Mujhse Shaadi Karogi charity. It was included in the song ‘Jeene Ki Jeene,’ which is one of the most well-known Hindi melodies of all time.

Madhuri Dixit is one of the most talented and best dancer in Bollywood. Her song ” dhak karne lag ” is one of the famous songs in her life. She sold the saree on an auction for Rs 80000 and donated the money for charity.

There were always extravagant costumes in Sanjay Leela Bhansali’s drama movies. The iconic green coloured lehenga that Madhuri Dixit wore in the movie Devdas was auctioned for Rs. 3 crores.

Akshay Kumar wore a suit for the film named “Oh My God” and sold it for 15 lakhs. After that, he donated some to the Muktangan education institution.

The legend Shammi Kapoor wore a jacket in the song ” Chaahe koi mujhe Jungle kahe” was bought by Aamir Khan for INR 80,000.

SRK, who created a doodle painting was sold for a whopping price of INR 2 lakhs.

DEV ANAND’S BLACK AND WHITE PICTURE WITH HIS SIGNATURE

Dev Anand implemented a number of 45 black and white photographs that were auctioned for Rs. 400000.

The Christian Louboutin heels worn by Priyanka Chopra were auctioned for Rs. 2.5 lakhs for UNICEF’s “Save the Girl Campaign.” Her autographed Gavin Miguel outfit was purchased for RS. 50,000 by a PC enthusiast. Farah Khan also donated money to charity by auctioning her purse.

Net worth of Mia Khalifa is huge, she worked hard to earn that much! 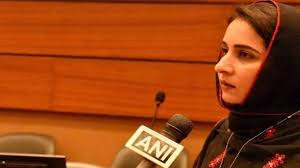 After Article 370’s revocation, proud Ladakh MP delivers his speech in Parliament, says the only impact will be on two families