She took the bronze medal after losing her semi-final bout in women’s welterweight (64-69kg) boxing to Turkey’s Busenaz Surmeneli via unanimous decision. With this achievement, Lovlina also became the third Indian boxer after the likes of Vijender Singh and MC Mary Kom to clinch a medal at the Olympic Games.

Surmeneli and Lovlina started off quite well but the Turkey international, the defending world champion in the category, clinched the opening round by a comprehensive score of 5-0 and got an early advantage.

India’s Lovlina tried her maximum best to fight back in the next round. Unfortunately, she struggled to get through Surmeneli’s defence. Surmeneli approached the game with caution and aggression and went on to win the second round. Turkey’s woman athlete wrapped it in style by holding off Borgohain in the third round to earn a win via unanimous decision.

With this win, the Assam boxer became only the second Indian woman boxer to win a medal at the Olympics. Boxing great Mary Kom won a bronze medal at the London Olympics in 2012.

Meanwhile, Prime Minister Narendra Modi congratulated boxer Lovlina Borgohain on winning a bronze medal in the Tokyo Olympics. PM Modi tweeted: “Well fought @LovlinaBorgohai! Her success in the boxing ring inspires several Indians. Her tenacity and determination are admirable. Congratulations to her on winning the Bronze. Best wishes for her future endeavours. #Tokyo2020.”

Sports Minister Anurag Thakur and Kiren Rijiju, the Union Minister of Law and Justice applauded India boxer Lovlina Borgohain. “Lovlina, you gave your best punch! India is extremely proud of what you have achieved! You’ve achieved a medal in your first Olympics; the journey has just begun!” Thakur wrote.

Rijiju also took to Twitter and wrote: “Well done @LovlinaBorgohai ! #Boxing #Olympics #Tokyo2020 #Cheer4India Dear @LovlinaBorgohai you have made our country proud! Congratulations on winning the Olympic Bronze medal! We are extremely proud of your achievement! #Cheer4India.”

He further tweeted: Dear @LovlinaBorgohai, you have made our country proud! Hearty congratulations on winning the Olympic Bronze medal! We are extremely proud of your achievement! #Cheer4India.” 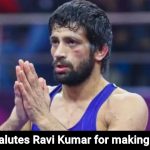