Majority of people in India are obsessed with having tattoos on their body. Earlier, one tattoo was just enough to show off but nowadays, people are getting multiple tattoos for crazy reasons. Majority of them get tattoos just for attention as it makes them feel alive and beautiful.

Some get tattoos of movie stars while others show interest in sporting heroes but do we have people getting tattoos of real-life heroes? Yes, there is a patriotic guy by the name of Gopan Saran. Saran is setting a great example to tattoo lovers by paying tribute to soldiers who lost their lives in the recent Pulwama terror blast. This guy tattooed the names of martyrs on his body.

He believes that real-life heroes are the ones who protect the nation like ‘shield’ in the Line of Control and which is why he showed a lot of love, respect and admiration towards the heroes.

This sums up the essential Gopan Saran for you! For him, Indian soldiers are his heroes.

When asked about the reason behind him doing this, he said, “I have seen youngsters getting their bodies tattooed with photos or names of movie heroes. So I thought I should pay tribute to my heroes in my own way. I am youth and for me, they are my heroes.”

Watch the full video below:

44 CRPF paramilitary troopers lost their lives when a Jaish suicide bomber rammed a vehicle carrying over 350 kg of explosives into a CRPF convoy of 70 vehicles in Jammu and Kashmir’s Pulwama district, in what is considered as the deadliest attack in the last 3 decades. 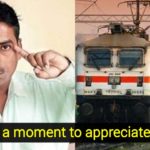