It’s PV Sindhu once again in the headlines as she won the silver medal for India in the Asian Games 2018 which is being held at the Jakarta, Indonesia. The World No.3 PV Sindhu was already assured of a silver when she defeated the World No.2 Japan’s Akane Yamaguchi in the semi-finals.

There were lots of expectations from PV Sindhu in the finals but she was tactically beaten by the World No.1 Tai Tzu-ying with a scoreline of 13-21, 16-21. This is Sindhu’s fifth final of this year. Let’s appreciate PV Sindhu for coming a long way in the competition. 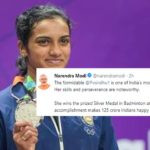