One of the awesome ways to spend some quality time is ‘Fishing’. It is a fabulous experience filled with thrill, fun and excitement. If you have some tricks, there are chances that you might catch a big fish. In one such experience, a man caught a giant catfish which weighs more than the humans.

The goliath catfish is a scary creature which weighs more than 300 pounds and the man used a fishing rod equipment to trap the giant fish within a matter of seconds as you can see in the video. He found it really difficult to drag the fish towards him as he noticed that it was a giant fish.

After finally managing to pull it towards him, he then jumped into the water and tried to lift the fish all alone by himself. But he couldn’t do it as the fish was too heavy. The video was posted by Daily Viral Stories. The video is viral all over the Facebook with 34 million views, 8,01,000 reactions, 8,200 comments and 11,400 shares.

Feast your eyes by watching the video below to get a better clarity on the incident that happened in Thailand: 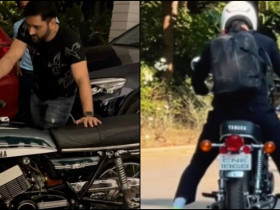