A. R. Rahman, is a legendary Indian film composer, record producer, singer, and songwriter who plies his trade primarily in Kollywood and Bollywood film industry. In 2010, the Indian government awarded him the Padma Bhushan, which is the nation’s third-highest civilian award.

From youngsters to the ones, aged with time, music has left a deep-rooted commitment to every human being in every stage of life. Music is an embodiment of love, anger, passion, and melancholy expressed through profound lyrics, tunes, and rhythms. A.R Rahman has well and truly composed the best music in the world.

In this article, we will take a glimpse at the unknown facts about A.R. Rahman.

Formerly known as Dileep Kumar, A.R. Rahman has changed the face of the music industry through his composition skills and a magical voice.

Although the mother was devoted to Sufism, A.R. Rahman converted into Islam, when his sister was taken ill and recovered as they offered prayers to Allah. He later announced it to the world.

A.R. Rahman revealed the reason why he changed his name from Dileep Kumar. “I never liked my original name, Dileep Kumar. I don’t even know why I hated it. I felt it didn’t match my personality. I wanted to become another person. I wanted to get rid of all the past luggage.” In the end, he took up Sufi Islam along with the whole family and gave a new name to himself as A.R. Rahman.

Composer, lyricist, and worldwide acclaimed singer, A R Rahman left school in the midway to support his family after his father’s untimely death. He later completed his education from Madras Christian College higher secondary school.

5. When A.R. Rahman hit out at Salman Khan 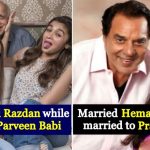