We all want to live the lavish lifestyles that celebrities enjoy, want to know all of their secrets and everything about them, and we pay more attention when they open up about their personal lives. Today, we’ll discuss some of the celebrities who have made honest confessions. Here’s a list of celebrities whose confessions went viral!

Hrithik Roshan, Bollywood’s Greek God, who is always so confident and charming on screen, stammered during childhood. He was traumatized as other kids at school would bully and tease him every time he tried to speak.

Arjun was once an overweight guy and this was the reason why Arpita Khan dumped him even after 2 years of relationship. Arjun after his first break in Bollywood opened up about his previous relationship, saying he met her during the shooting of ‘Maine Pyaar Kyun Kiya’.

On a talk show Koffee With Karan, Salman confessed that he is a virgin and is saving himself for the person he is going to get married to.

Sonam is a fashionista who enjoys wearing designer labels. But she said in an interview that she cannot wear a bikini because she has excess cellulite in her body. Surprisingly, in the film Bewakoofiyan, Sonam wore a bikini and pulled it off flawlessly.

Shah Rukh Khan said that suffers from being unable to make friends. Many of Shah Rukh Khan’s relationships have soured, including Salman Khan, Shirish Kunder, Karan Johar, Farah Khan, among others.

Alia confessed that she is afraid of darkness and sleeps with the lights on. She also doesn’t like flying.

Ranbir and Deepika were dating at the time, but they broke up after Ranbir developed feelings for Katrina Kaif. Later, Ranbir admitted , “Yes, I have, out of immaturity, out of inexperience, out of taking advantage of certain temptations, out of callousness. You realize it now when you grow up and you value relationships more.”

Vidya had to grease the hands of the officials when she was finally registering for her new home in order to get things handled the way she wished. She did, though, vow at an awards ceremony that she would never bribe anybody before.

Govinda is well-known for his legendary dance routines as well as his hilarious comedy roles. He has, however, confessed to having extramarital affairs outside of his marriage. He did not go into depth on any of it, adding, Any aspects in life should not be discussed openly.

The Bollywood dive who popularised the zero-size body and acknowledges that she doesn’t wash her jeans too much, even for months at a time, and that she wears them every time she travels. She confessed that she even falls asleep in her worn jeans while travelling in a jet.

Anurag Kashyap’s tormentor humiliated him as a child, and when they crossed paths, he saw a deep look of remorse on his face. Rather than charging him, Anurag decided to forgive him.

Both Sidharth and Alia began their careers with the film Student of the Year, in which they kissed. Later Siddharth confessed that kissing Alia was boring, he enjoyed kissing Deepika though.

Kalki was sexually assaulted as a child, but she used her platform to advocate for today’s victims and encourage them to step up and fight back. 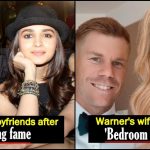