It is a well-known fact that social media platforms have helped celebrities gain massive popularity that too in a short span of time. On the dark side, there are some people who intentionally stoop to their lowest level to abuse or troll celebrities.

There is literally nothing that can stop Singer Chinmayi Sripaada from raising voice for what is wrong. She is not only popular for her melodious voice but also known for the knack of giving it back in style especially when it matters the most. Very recently, a man texted her asking for nude pictures.

Men asking women to send their nude pictures on social media is not something new nowadays. While mostly women proceed to the next step by ignoring them or blocking such users, Chinmayi tried to do something different that the man will forever never forget it. She boldly took a screenshot of the chat and then shared it on Twitter.

‘In the meanwhile.. for some entertainment,’ Chinmayi tweeted.

In her epic reply, she sarcastically shared pictures of ‘nude shades of lipstick’. After she shared her response on micro-blogging Twitter platform, people started cheering for Chinmayi and at the same time roasted the man for sending an inappropriate message. 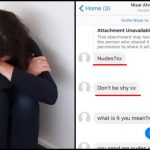