After Aishwarya Rai gained some kilos due to her pregnancy, she was hit by body-shaming remarks. She didn’t speak on it but her husband Abhishek Bachchan came out in support of his wife. 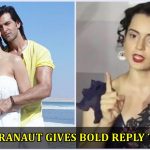